I have begun the drafting process of the poster for the first part of our ancillary work.

The first thing I have to say is that I am not the greatest of drawers and I have tried to do the drawing to the best that I possibly can. The draft is just to see what the finished is hopefully going to come out like. For the dominant image of this poster we have decided to go for a simple background of just the forest, like the background used on Friday 13th poster, but decided to not go with the victim (Callum) on the front cover. However this may change with further progression throughout the course of this unit. The title of the poster “FOREST OF THE UNKNOWN” will be with a font that we had already selected on cooltext.com because they have a selection of horror fonts and the one that we chose was called “Bloodfeast”. We chose this font because of the way that the blood drips down off of the letters is a good contrast for the plot of our trailer because the blood, along with the colour of blood that we are going to incorporate, connotes the feelings of death, anger and danger which is what we want to give across to the audience.

The lighting of the image is going to be a very dark and dull image because we don’t want it to be to dark so that the audience can’t physically see the image but not to light that it completely gets rid of the image connotations as whole. The features such as the logo and the taglines are going to be created very soon and this will allow us to think of the layout that we will use and connotations that we want to give off. 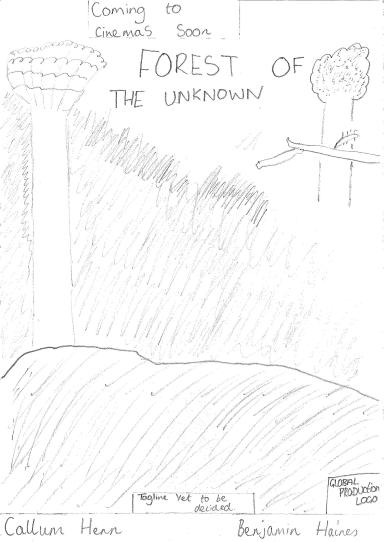