The next movie poster that I will be blogging about is Sinister.

I believe that this poster follows the typical conventions of a horror movie and here is why I believe this:

To begin with there is an image of what appears to be is the monster/culprit in this film. The image seems to be drawn in blood which, like most horror films, has connotation an links with blood, anger, danger, violence and even death. As a whole this would indicate and set the scene for the rest of the movie that the fact that it will be something to do with a person or monster who is bloodthirsty and lots of people are going to get effected.

There is a tagline which reads simply “Once you see him, nothing can save you” this can be very effective because it could suggest that the thing behind this film is still at large or that it isn’t only a fictional character but that it could be based on a true story and still alive. It could also be linked to the fact there is an unravelled tape on the floor which could be an indication that once you watch the tape, you will be a part of the devil. Furthermore the background of the poster is a wall which is starting to crack and shows a darkness about this as well. The use of all of these together gives a spooky and abandoned impression.

Another key part of this poster is of the little girl who is smearing the blood across the wall as she is walking past. She is in her pyjamas and her face is covered. This could only assume that she is either a regular but very vulnerable character or that she is being possessed by the evil character that is the main basis of this film. The blood that is being smeared by the girl reveals the face of the devil that is possibly possessing this girl.

The title of the movie is in the centre of the page, it is in black and has drips coming down. This makes the text appear as if it were written in blood, emphasising how many horrific deaths are contained in this film. The image of the poster makes the film seem very gruesome and really scary because in most horror films, children and the devil is a typical use of iconography for this genre of film.

A final thing that makes this poster very effective towards the audience is the fact that it says from the producers of Paranormal Activity and Insidious. This is a good technique for the audience because it lets them know that they can expect the same sort of horror and fright that is associated with these two films. Furthermore the fact that it will be the first thing that the audience will read when they see this poster, its a good way to intrigue an attract the customers into watching this film that is sure to give them a  big fright and will terrify them. 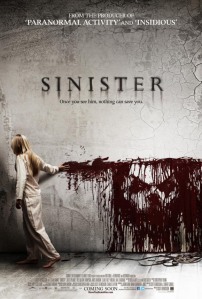